Lisa Haydon (born Elisabeth Marie Haydon; 17 June 1986) is an Indian model and actress, who appears in Bollywood films. She received critical praise for her performance in the comedy-drama Queen, which garnered her a Filmfare Award for Best Supporting Actress nomination, among other accolades. Haydon later starred in the commercially successful comedy Housefull 3 (2016). See online movies from Lisa Haydon below. 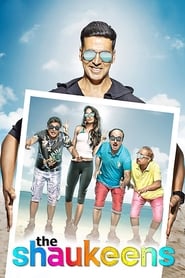 Three friends in their 60s try to do everything that they co...