From Wikipedia, the free encyclopedia. Mitsuo Yamaguchi (  Yamaguchi Mitsuo ), better known by his stage name of Kappei Yamaguchi ( Yamaguchi Kappei?) (May 23, 1965 - ) is a Japanese seiyū and actor from Fukuoka, affiliated with Gokū  and 21st Century Fox. He is best known for the roles of Ranma Saotome (Ranma ), Jackson Neil (Miracle Girls), Tombo (Kiki's Delivery Service), Yattaro (Kyattou Ninden Teyandee), InuYasha (InuYasha), Ryuichi Sakuma (Gravitation), L (Death Note), Usopp (One Piece), Hideyoshi (Law of Ueki), and Kaito Kid and Shinichi Kudo (Case Closed). His current starring roles include that of Raimon "Monta" Taro, the Deimon Devil Bats' ace receiver in Eyeshield 21. Yamaguchi has appeared in eroge as Kyōya Ushihisa (  Ushihisa Kyōya ).  He made his first public appearance in North America at Otakon 2008;  and was also a guest at Sakura-Con 2009.  Yamaguchi's third appearance to date has been at Animazement in 2010. He is married and has a son. Description above from the Wikipedia article Kappei Yamaguchi, licensed under CC-BY-SA, full list of contributors on Wikipedia . See online movies from Kappei Yamaguchi below.

Inuyasha the Movie 3: Swords of an Honorable Ruler

Inuyasha and his brother, Sesshomaru, each inherited a sword...

Inuyasha the Movie 4: Fire on the Mystic Island

The mysterious island of Houraijima has reappeared after 50... 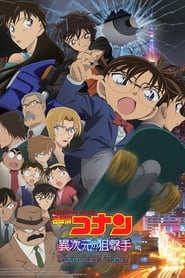 A vicious sniper has appeared in Tokyo, rendering the people...

An adolescent with the ability to control a looming war-gole...

One Piece: The Desert Princess and the Pirates: Adventure in Alabasta

A re-telling of the Alabaster Arc from One Piece (TV). Luffy...

Yagami Light is an ace student with great prospects, who's b...

One Piece: Baron Omatsuri and the Secret Island

An intelligent high school student goes on a secret crusade...

Relaxing on a cozy beach, the Straw Hat Pirates are taking a...